Are we all victims somehow?

A Bundestag debate on the attack in Halle ends up being settled with the AfD. The relies on disgusting forward defense. 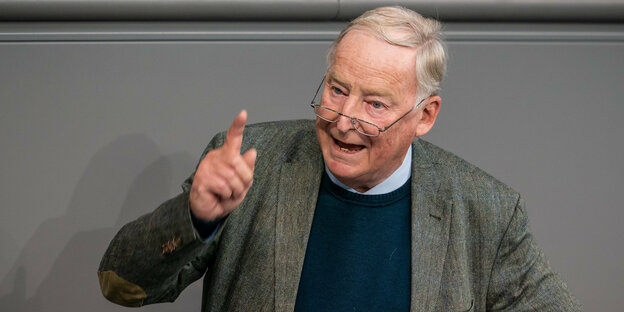 Believes himself a victim - Alexander Gauland has neither apologized nor distanced himself Photo: dpa

BERLINtaz | Horst Seehofers has been talking for a few minutes about what he wants to do after the right-wing extremist terrorist attack in Halle. Then he speaks to the AfD parliamentary group leader on the anti-Semitic tweets of one of his MPs. "I just ask you: distance yourself from such statements."

Gauland stares in the front row of the AfD parliamentary group in the plenary hall. He will not apologize with a word this Thursday morning. Instead, he will portray his party as a victim in an obnoxious inverse, once again.

But let's start at the beginning: The Bundestag commemorated the victims of the attack in Halle. A right-wing extremist had shot a passerby and a man in a kebab shop last week. He had also tried to gain entry to a fully occupied synagogue - without success. If the door hadn't existed, Seehofer emphasizes, “we would have experienced a bloodbath”. The morning in parliament becomes a solidarity between the Democrats and the right-wing populists.

Perhaps the perpetrator acted alone, says SPD parliamentary group leader Rolf Mützenich. “But it is sustained by a system of agitation, chauvinism and right-wing extremism. And the AfD is part of this system. ”In the midst of their ranks were MPs who had spread“ disgusting comments ”about the victims. Green parliamentary group leader Anton Hofreiter also criticizes the fact that the AfD does not distance itself from the statements of its MP Stephan Brandner. "That shows the true face of the AfD, and it shows that you are not a democratic party."

Mocking heckling from the AfD

After the attack, Brandner shared a post on Twitter by a user that mocked solidarity with Jews. The latter had written that the victims of Halle were a “German” and an “organic German”: “Why do politicians hang around with candles in mosques and synagogues?” Brandner also had the publicist and former vice-president of the Central Council of Jews in Germany , Michel Friedman, denigrated as "German Michel". Brandner is the chairman of the legal committee in the Bundestag.

In the AfD parliamentary group: crossed arms, angry expressions, scornful heckling. As he stands in front, Gauland begins a remarkable forward defense. He refers to the attack on Breitscheidplatz in Berlin and to the murder of Susanna F. in 2018, for which an asylum seeker was convicted. For the "general radicalization", says Gauland, those who have let refugees into the country since 2015 are responsible. His party had been covered with "unprecedented agitation" in the past few days.

In any case, Gauland, 78 years old, sounds like a defiant child. And you almost wanted to laugh if it weren't so terrible. So it is refugees to blame if a German right-wing extremist decides to massacre Jews? Gauland uses a similar argumentation figure as Springer boss Mathias Döpfner. He recently used the attack as an opportunity to complain in an editorial about the “constitutionally very dubious refugee policy” and “criminal immigrants”.

Fortunately, the debate is not just about the AfD. Bundestag President Wolfgang Schäuble (CDU) asks the MPs at the beginning of the session to rise from their seats to commemorate the victims. Then he finds worthy words, points to everyday anti-Semitism, to the fear of many Jews to show their faith publicly. Everyone must make a contribution “that everyone in this country, regardless of religion, origin or gender, experiences the basic security to live freely and independently”.

Seehofer announced measures against right-wing extremist violence. The Federal Criminal Police Office and the Office for the Protection of the Constitution need more resources and personnel to fight right-wing extremism. Together with Justice Minister Christine Lambrecht (SPD), he wants to oblige the providers of Internet platforms to report content relevant to criminal law. And Jewish institutions should be better protected by the police and structural devices.