Asset inflation is a bad thing

How inflation affects your investment

Savers are currently not to be envied: the interest rates are measly, the stock exchanges moody. So what do you do with your savings so that they grow reliably and without risk? One possibility are interest-bearing investments such as fixed deposits or savings bonds. They guarantee secure, predictable interest rates and no costs. In addition, the European deposit insurance offers a high level of capital security. But are fixed-interest investments even worthwhile? After all, the interest rates are in the basement. Large returns are currently not to be expected, and inflation is eating away at the value of profits.

But that's too easy to think. Because inflation continues to fall due to the ongoing crises in recent years, the earnings prospects for interest savers are improving. Inflation is currently hovering around zero. To the delight of savers, because thanks to zero inflation, interest-bearing investments generate real profits again.

Inflation is a process of persistent devaluation in which prices rise across the board. As a result, one unit of money can buy less and less, that is, the purchasing power of money decreases. At the same time, inflation also leads to the devaluation of savings, because the value of money decreases over time.

On the other hand, one-off or short-term price level increases, such as those caused by unusual events such as crop failures due to catastrophic drought, do not count as inflation. Price increases for individual goods, such as a gasoline price increase due to an oil catastrophe, are also not considered to be inflation.

Inflation is measured by the rise in a generally recognized price index. In Germany, for example, this is the consumer price index for Germany. The percentage increase in this index over a certain period of time is known as the inflation rate.

What is the cause of inflation?

When inflation occurs, the money supply plays a key role. If the amount of goods in an economy is offset by an excessively large amount of money, this can lead to excess demand. If the demand for goods exceeds the supply of goods and the economy cannot increase supply quickly enough, prices rise. The result: inflation sets in. This happens especially in times of economic boom.

Another cause of inflation does not result from higher demand, but from low supply. The so-called supply inflation is characterized by the fact that prices of production factors such as raw materials rise. This can happen through a scarcer supply of raw materials, but also through state regulation, as in the case of rising wage costs. Rising prices make the manufacturing process and thus many goods more expensive. Companies are forced to raise the prices of their products, which leads to increasing additional costs for consumers. If consumers have to pay more for products without their wages rising, their purchasing power falls. You will now get fewer goods for your money than before. Supply inflation can also be imported from outside, for example through trade wars or political crises.

Deflation is the opposite of inflation. Deflation is characterized by a sustained decline in the price level. This happens, for example, because the amount of money in circulation is decreasing or the overall economic supply exceeds demand. Continuously falling prices can mean that wages fall and unemployment rises in the medium and long term. Deflation can be triggered by rising key interest rates or falling government spending.

How does politics affect inflation?

The European Central Bank is responsible for fighting inflation and maintaining price stability in Europe. The mandate of the ECB is set out in the European Treaties. The ECB considers price stability to be a given when the annual rate of inflation is just below two percent. Many politicians and most central bankers consider this inflation rate to be desirable because it provides growth impulses without depleting savings too quickly.

In order to achieve the two percent target, central bankers lower interest rates in times of crisis so that economic activity is stimulated. Lower interest rates make loans cheaper and more investments can be made, according to the theory. Increased investments then ensure economic growth, new jobs and rising wages. This spiral is supposed to cause prices to rise.

However, in the course of serious crises such as the 2008/09 financial crisis and the 2020 corona crisis, these mechanisms do not always work. The economies affected are currently recovering only very slowly and inflation remains extremely low. Zero percent inflation or even minus inflation are dangerous for the economy. Consumers and companies could postpone purchase or investment decisions and hope for even lower prices. This can cause the entire economy to stall.

The ECB wants to push inflation up again with low interest rates, in some cases even negative interest rates. But this course is not without its dangers: Cheaper loans could lead to over-indebted households and companies. Without interest on the savings, private old-age provision is also difficult. Banks hardly earn any money from their traditional lending business and are therefore taking greater risks. The economic situation of the individual euro countries differs greatly, however. Therefore, the preferences for an appropriate monetary policy also diverge. This creates a serious problem for the ECB, because it can only make policy for the euro zone as a whole, i.e. not respond to the individual wishes of its member states. 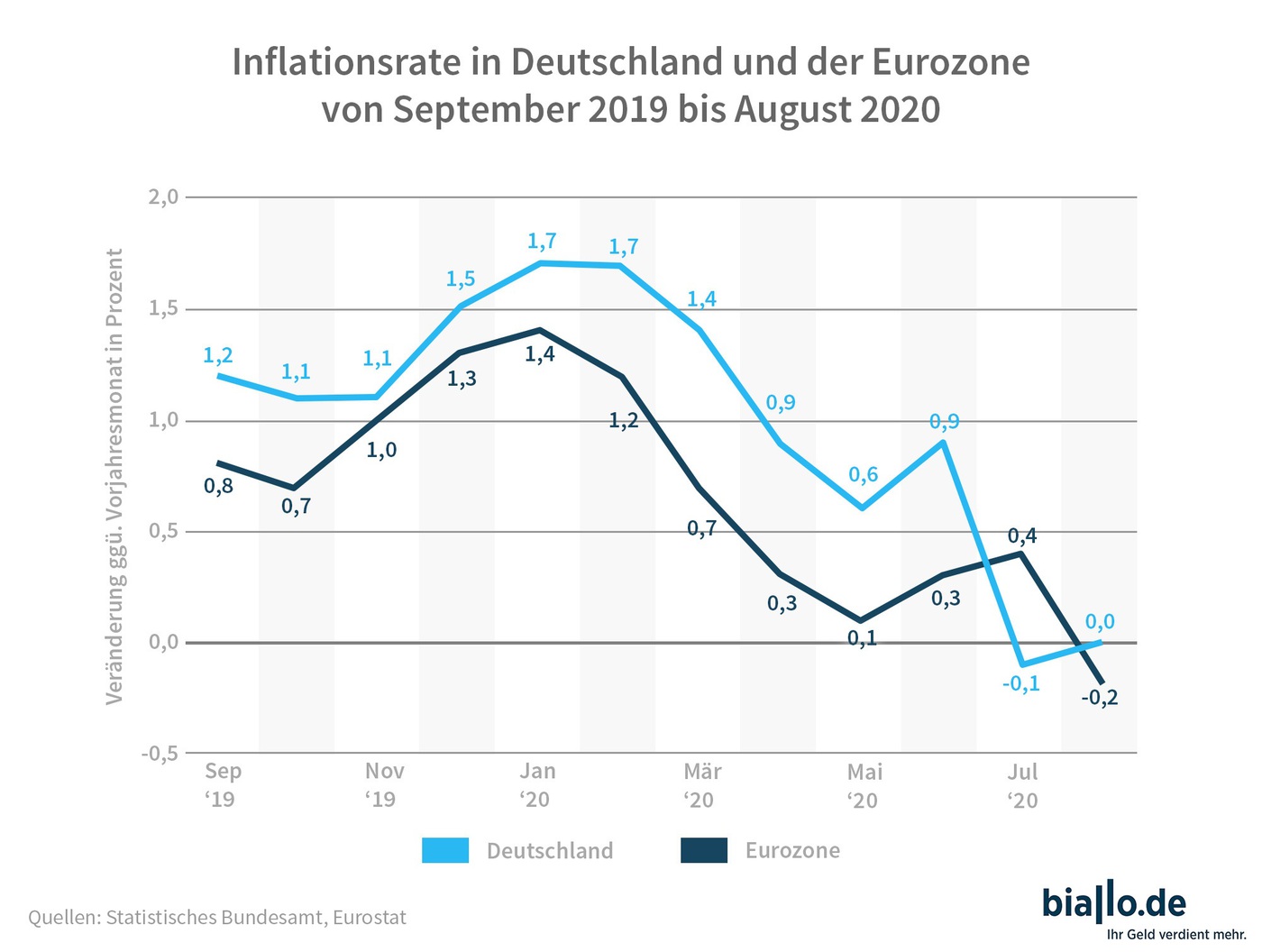 According to the Federal Statistical Office, the inflation rate in Germany in September and October was minus 0.2 percent. It is negative for the third time this year; in July it was minus 0.1 percent. The main drivers for falling inflation are lower VAT and lower energy prices.

Consumer prices also fell again in the eurozone. They fell by 0.3 percent within a year, as the European statistics agency Eurostat announced. That's the lowest rate in over four years. In August, the inflation rate was minus 0.2 percent.

Analysts and market watchers assume that the development will continue for a while. After all, the corona crisis still has a firm grip on the global economy and a change in the ultra-loose monetary policy of the global central banks is not in sight.

The majority of economists expect the German inflation rate to be zero by the end of 2020. Some even see them deeper. Only in the new year, when sales tax is set to rise again in Germany, inflation should pick up slightly. However, a surge in inflation is not expected in 2021 either. The experts at the International Monetary Fund (IMF) expect an average inflation rate over the year of 1.2 percent.

What is the real interest rate?

The nominal interest rate shows how an investment pays off. But you don't know how much this interest will be worth in real terms at the end of the term, i.e. what purchasing power it represents. You only see that when you compare inflation.

Nominal interest is not decisive

Conversely, this means that even with very low interest rates, interest gains are possible, provided the inflation rate is still lower.

And that is exactly what has been the case for some time. The nominal interest rates on overnight money accounts and fixed-term deposits have remained at a low level for years, but because the inflation rate has now fallen below zero, real interest income has risen. The interest income is currently not diminished by a loss of purchasing power. So the bottom line is that there is more net income.

Keep an eye on inflation

How is inflation affecting your money?

Inflation causes continuous currency devaluation. Consumers notice this not only when they can buy fewer and fewer goods for the same money, but also when they take their money to the bank and invest it with interest. The effects of inflation are particularly evident with a longer investment horizon. Two percent less purchasing power after a year may not make a big difference. Calculated over ten years or more, however, this does mean a significant reduction in the asset.

The following model calculation shows what happens to 10,000 euros of investment capital over 20 years if no interest is paid and the inflation rate is two percent. Without interest income, the asset would decrease by around a third. 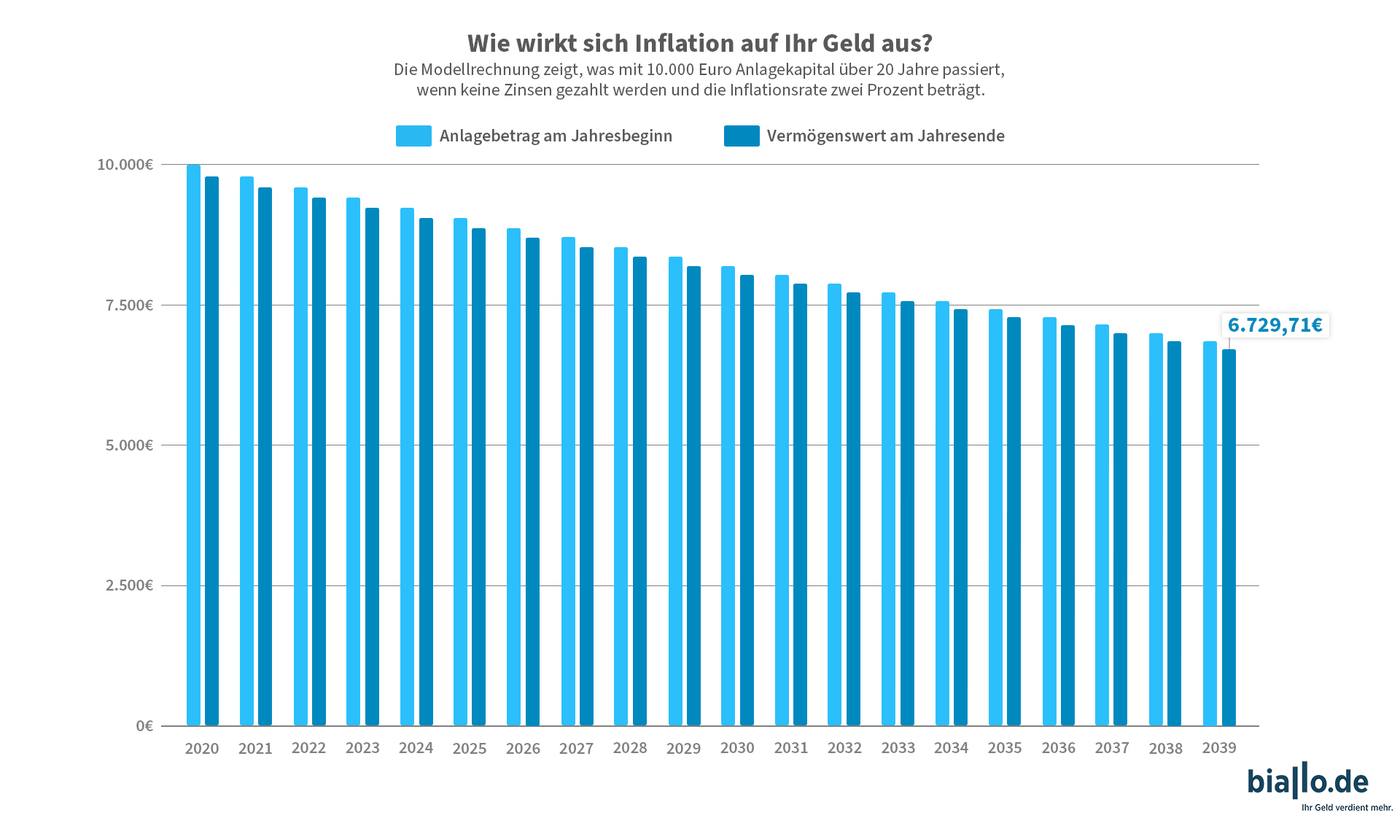 Borrowers, on the other hand, benefit from persistent inflation. Because with inflation, the real value of debt also shrinks. If the rate of inflation is higher than the rate at which a borrower borrowed money, their debt miraculously melts away. Conversely, the above table also applies to the value of credit debts.

Which investments can you avoid inflation?

So that inflation does not destroy your money, it is important not to leave it without interest. There are different options depending on what type of investment you are and what the money is for. The following table gives a rough overview:

One way of investing savings with high returns is often overlooked: last year, there was an average dividend of 4.0 percent nationwide for cooperative shares.

The sources used in the article come primarily from primary sources such as studies, analyzes, federal statistics, business reports or interviews with industry experts. If necessary, we also refer to original research by other reputable publishers. In our Editorial Guidelines you can find out more about the criteria we adhere to when creating accurate and unbiased content.
The conditions shown in the article come from the respective provider.

* Advertisement: Links marked with an asterisk (*) are advertising links. If you click on such a link, buy or complete something, we receive a commission. There are no additional costs for you and you support our work.
<?