Are Spain and Portugal the same

The border between Portugal and Spain

Spain is the only country that shares a land border with Portugal. However, this has largely existed since 1297, making it one of the oldest borders in the world. 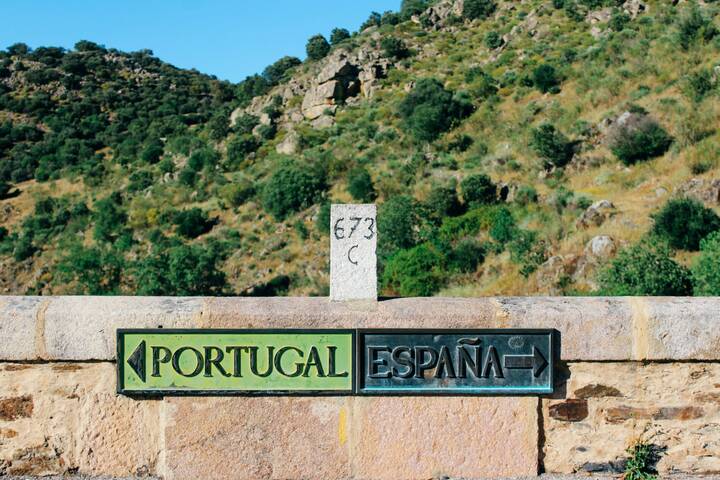 A Raia - the strip

A Raia (Spanish la Raya) is the name of the 1,214 kilometer long border between Portugal and Spain. With the Treaty of Alcañices on September 12, 1297, the border between Portugal and Castile was officially established. The peace treaty concluded between the Portuguese King Dionysius and King Ferdinand IV of Castile ended a series of armed conflicts between the two countries.

Today the border between Portugal and Spain is the oldest existing of its kind within the European Union.

Current information about the border between Portugal and Spain can be found under Corona in Portugal.

18 kilometers of the border have not yet been finally clarified. Between the Rio Caia and the Ribeira de Cuncos is the Spanish town of Olivença (Portuguese: Olivenza). It belongs to the province of Badajoz in the Autonomous Community of Extremadura.

The story of the border dispute begins in 1297 with the Treaty of Alcañices, according to which Castile ceded Olivenza to Portugal.

During the Orange War (Guerra das Laranjas) in 1801, the city was occupied by Spanish troops a short time later and again ceded to Spain in the Peace of Badajoz.

Spain holds this treaty to this day, while the Portuguese accused the Spaniards of breaching their treaty when they were attacked by Spain during the Napoleonic Wars in 1807.

According to Article 105 of the Congress of Vienna of 1815, the borders between the two countries in the area around Olivenza should run as laid down in the Treaty of Alcañices in 1297.

To date, however, Portugal has never made a formal claim to Olivenza and has never recognized the Spanish claims. So the question of sovereignty has not been resolved to this day and will probably remain so. Neither government is interested in changing the status quo.

Important places on the Portuguese-Spanish border

The largest border town is Badajoz on the Spanish side. Directly opposite is the small Portuguese town of Elvas, whose fortifications are a UNESCO World Heritage Site.

In the south, the two coastal cities of Vila Real de Santo António (Portugal) and Ayomonte (Spain) are only separated by the border river Guadiana. Other border towns on the Portuguese Algarve are Castro Marim and Alcoutim.

In the north of Portugal, the Peneda-Gerês National Park borders on Spain. Both countries are separated a good bit by the Rio Minho. Interesting cities are Valença and Caminha on the Portuguese side and Salvaterra de Miño and Tui in Spain.

Three large rivers partially form the border between Portugal and Spain. In the north it is the Rio Minho, in the northwest the Rio Douro and in the south the Rio Guadiana.

In its lower reaches, the Minho forms the northern border of the two countries for 70 kilometers. The Douro forms the Spanish-Portuguese border in the northwest over a length of 112 kilometers, before flowing on to Porto, where it flows a few kilometers further into the Atlantic.

In the south of Portugal, the Guadiana separates the Alentejo and Algarve regions on the Portuguese side from the Extremadura and Andalusia regions in Spain.