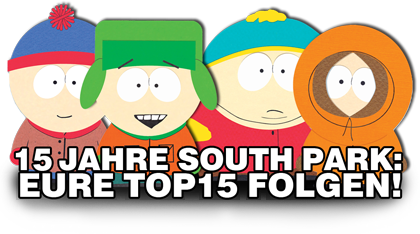 Our favorite series has been around for 15 years! In March 2011, a large survey was therefore carried out in the USA to find out what the fans' 15 favorite episodes are. And because it looked as if the official German South Park homepage would not take part (which it did - then vote three times;)), I also started a survey here at the Planearium. So you chose:

• 341 valid participants voted on this poll
• 25 had correctly guessed the two most popular episodes for the competition (order does not matter)
• Wing is the only (!) episode that was not mentioned once and is therefore in last place
• Cartman gets an anal sample, the very first South Park episode, made it to number 34
• The seasons: The survey does not reveal that the newer episodes are less popular than the old ones. On the contrary: Season 14 did the best! But you have to take into account that the latest season often has a small bonus in such surveys because it is best remembered. Apart from that, have Season 11 and 5 To offer the most good episodes in your opinion. So if you want to get a relay box, you should perhaps use this;). Season 2 did poorly, the others are qualitatively in balance with good and less good episodes.
• Our result is similar to the average ratings of the IMDB in many respects. However, the Coon episodes are less popular there. The first two places of the official U.S. Top15 polls were the same. But then Good Times With Weapons followed. There, too, the superhero episodes didn't do as well as we did, but episodes with religious topics (Scientology) were more popular.
• Something Wall-Mart This Way Comes and Professor Chaos, which is one of the most popular in the episode guide ratings, only made it to places 45 and 48
• Coon VS Coon & Friends On the other hand, it did much better than in the Episodeguide ratings: 26th place
• And finally a few insider tips - or a clear case of "a matter of taste";). Episodes that were not mentioned that often, but that were placed very high IF they were mentioned: Are You there God? It's Me Jesus !, Ike's Wee-Wee, Terrance & Phillip in "Not without My Anus"

Those who correctly predicted the two most popular episodes could win the new South Park DVD "Butters Little Box", donated by Paramount.
congratulations to Dustin!