Steel blue sky and "cozy" 14 degrees. As far as I can tell after eight days at sea, August is at its best here in Cuxhaven today. The strong tides set the tone in this part of the North Sea. If you want to go into the harbor or out to sea, it makes no sense to fight against the current, especially if you are sitting on a traditional sailor like ours.

Today we go out to measure particulate matter emissions from ships and we don't have far. If you look out to sea from Cuxhaven, you can see an endless caravan of ships that travel along the coast to and from Hamburg, Germany's largest port. Many of them are maritime giants whose huge engines can be heard pounding in the distance day and night. 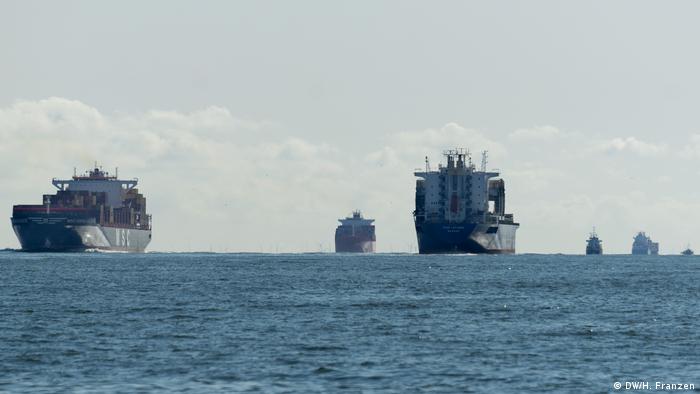 "Look at that rash!" says Sönke Diesener as the Ryvar, our 101-year-old logger, crosses the shipping lane behind a huge tanker. The latter, who works for the "Naturschutzbund Deutschland" (NABU) in the field of transport policy, holds a metal rod over the railing. A device is attached to it that measures the particulate matter pollution in the air. Within seconds, the number on its display shoots from 800 particles per cubic centimeter to over 50,000. The maximum value is 73,000 at the end.

"At a busy intersection of a major artery in a big city, you get to 16,000," says Diesener in the reserved manner of a Hanseatic. The numbers speak for themselves.

The real problem is not that these ships use a lot of fuel even when they do. The problem is, they often burn dirty fuel and how they do it.

"To this day, most ships burn highly toxic heavy fuel oil on the high seas," explains Diesener. "In the end, heavy oil is a residual product of fuel production. Gasoline is made, diesel is made and what is left is heavy oil." They also emit nitrogen oxides, which over-acidify the soil and over-fertilize lakes and coastal areas, thus destroying the balance in these ecosystems. And last but not least, these ships also pump large quantities of particulate matter and soot into the atmosphere.

A relatively easy way to drastically reduce emissions would be to stop burning heavy fuel oil and use diesel instead. Then you could also install diesel particulate filters (DPFs), which would reduce soot and fine dust emissions by up to 99.9%. A special SCR catalytic converter, in turn, could eliminate 70 to 80 percent of nitrogen oxide emissions. Both systems are already in use on several ferries and cruise ships.

And the heavy fuel oil could still be used elsewhere. It could be broken down further, says Diesener. "The solids that are left over at the end could be used in road construction or as fuel in power plants."

Have fun on the cruise

But why do we care about ship emissions? Big ships, after all, spend much of their time out at sea, and most of us don't. First of all, there is climate change. According to a study in the "Journal of Geophysical Research", soot is the second most important climate emission after CO2. Among other things, it absorbs the sun's energy and thereby heats the atmosphere. When it falls on snow, for example in the Arctic, the so-called reflectivity of the snow decreases because it is less white. As a result, less solar energy is reflected, which in turn contributes to global warming. 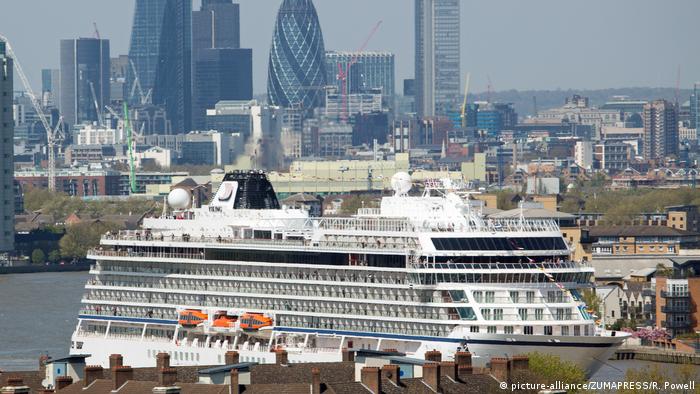 Cruise ships in particular often go right into the middle of the city, where their constantly running engines contribute to pollution

In addition, these large ships are often closer than you might think. In port cities, cruise ships are often close to the city center and keep their engines running all the time. This is almost inevitable, because they are basically large floating hotels, where the pool has to be heated and the air conditioning has to be operated in the harbor. A modern cruise ship needs about as much electricity as a city with 20,000 inhabitants. You can't just turn off the engine and plug in an extension cord like we do on the Ryvar when we're in port.

It's not that simple, but it's also not impossible. In 2012, after long negotiations, an international standard for shore power supply for ships (OPS) was finally agreed. Progress is slow, but at least a growing number of ports are now offering OPS and several ferry lines and cruise line operators are converting their ships accordingly or are already using OPS. 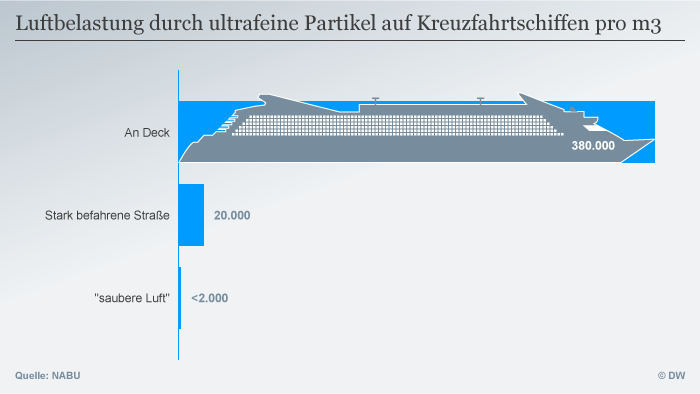 Despite sea breezes, fine dust pollution on cruise ships is often much worse than in cities

One challenge was that ships use different voltages on board depending on how old they are or where they come from. The large amount of electricity that is required could also mean that the electricity grid in some ports cannot meet the demand and that additional power plants would have to be built there, which would greatly increase the costs for a shore power supply. The port of Gothenburg in Sweden already had electricity available when the first OPS system was installed there in 2000. In the meantime, they have gone a step further and installed several wind power systems - not because they needed the additional electricity, but because the operators wanted to supply green electricity.

In order to drive even greener, there is also liquid gas (LNG) as a fuel, which burns much cleaner than diesel or oil. Several ferries and even a container ship are now using this technology. Scandlines uses hybrid ships on ferry connections between Denmark, Germany and Sweden. Similar to hybrid cars, they combine combustion and electric motors.

"In this way, the ferry can optimally adapt its fuel consumption to the load. In this way, up to 15 percent of CO₂ emissions can be saved," says Anette Ustrup Svendsen, Head of Corporate Communications at Scandlines. "Our long-term goal is zero emissions." 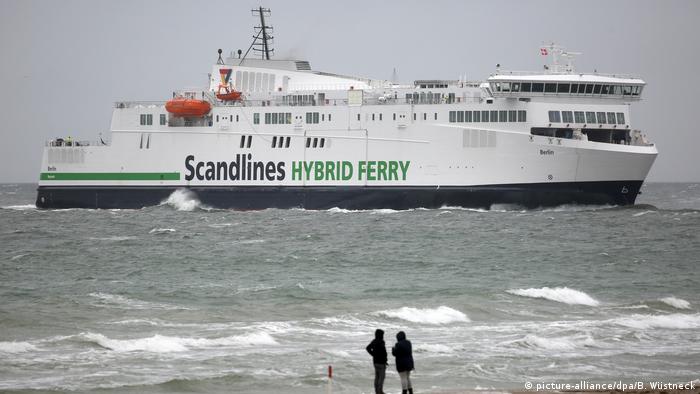 An electric ferry in Norway has already done this. The 80 meter long catamaran has been doing its laps in Norway's largest fjord since 2014 and the electricity for it comes from climate-neutral hydropower. There are even solar powered ferries, but they are also much smaller. Berlin's transport companies have been using four of them for several years.

Back on the Ryvar, a call from the stern interrupts this remarks. The captain has initiated a turn and the tree of our main mast thunders over our heads to the other side of the ship. We have to get to the ropes as quickly as possible - at our assigned posts at the main and foremast. Sometimes even traveling on an emission-free ship is a bit exhausting.