How can I withdraw money free of charge from as many ATMs as possible? 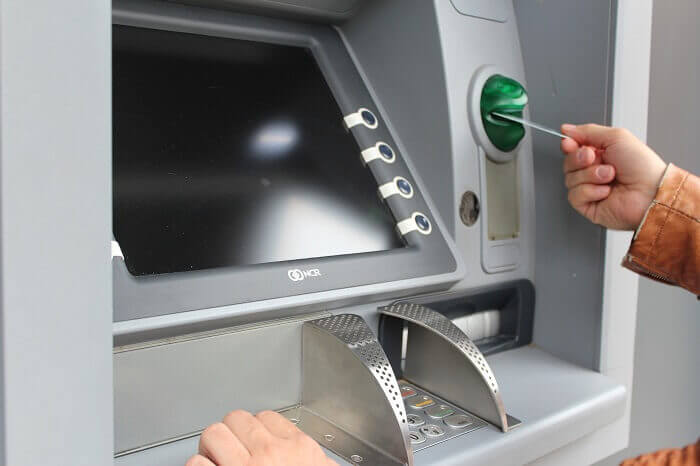 There is hardly any other country where you will find as many ATMs as in Germany. You can find dozens of ATMs even in smaller towns. The Volks- and Raiffeisenbanken as well as the savings banks often have a machine even in villages. In big cities it is hard to keep track of the number of machines. In Germany it is usually not a problem to find an ATM. But just because you've found a machine doesn't mean you can withdraw cash for free. In this guide, we would therefore like to show you which checking account is best for you for frequent withdrawals of cash and what you should pay attention to.

Who operates most of the ATMs in Germany?

When it comes to withdrawing money, the most important thing is which bank has how many ATMs on offer. The cooperative banks and savings banks with their large branch network stand out here. Of the almost 58,000 ATMs in Germany (as of 07/2018), by far most are operated by the savings banks. In total, Sparkassen-Finanzgruppe operates around 25,000 ATMs (as of 07/2018). That's almost half.

Otherwise, only the cooperative banks operate a similar number of ATMs. The Volks- and Raiffeisenbanken as well as partner institutes jointly operate around 19,000 ATMs in Germany (as of 07/2018). Private banks have considerably fewer machines. They have merged into two different ATM networks. That is why there are four machine networks in Germany:

The Cash Group is the much larger network of private associations. The members Deutsche Bank, Commerzbank, Postbank, Norisbank and HypoVereinsbank jointly operate a little more than 9,000 ATMs (as of 01/2018) and offer very good coverage, especially in large and medium-sized German cities. However, this network is poorly represented in rural areas.

The Verbund Cashpool also only offers a few ATMs in rural areas. There are significantly more members, including smaller private banks. The best known are Degussa Bank, Sparda Banks, Santander Consumer Bank, Targobank and Wüstenrot. In total, the banks mentioned, which have joined forces to form the cash pool, operate around 3,000 ATMs in Germany (as of 07/2018). The coverage is very unequal from region to region, as most of the member banks are mainly represented in southern Germany (Bavaria and Baden-Württemberg) and in North Rhine-Westphalia. The coverage of the cash pool association in East Germany is weak.

Can I only withdraw money from ATMs in my network? 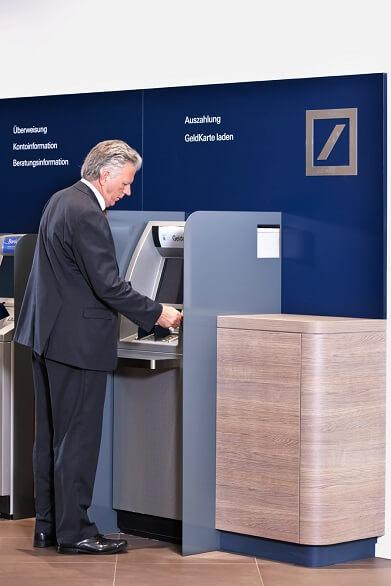 You may now be wondering what these numbers mean for you in the end. The answer to that is probably more reassuring than you might think at first. You can use the external machines without any problems even if you do not have an account with one of the banks mentioned. The almost 58,000 ATMs in Germany are basically available to you without any further restrictions - regardless of which bank or credit card you use to withdraw money.

There are big differences when it comes to costs. Because cash withdrawals are usually only free of charge if you have a current account with a bank of the respective association. So if you have a current account at Deutsche Bank, for example, you can usually use your bank card to get cash free of charge at all Cash Group Allianz machines. The same applies if you have an account with the Sparkasse and would like to withdraw cash from any other Sparkasse in Germany. You should keep in mind that this only works if your bank also allows free withdrawals. With some current accounts, free withdrawals from your own (and thus also from other banks in your own network) are only possible in a certain number or even not at all.

What are the fees for withdrawals from third-party ATMs? 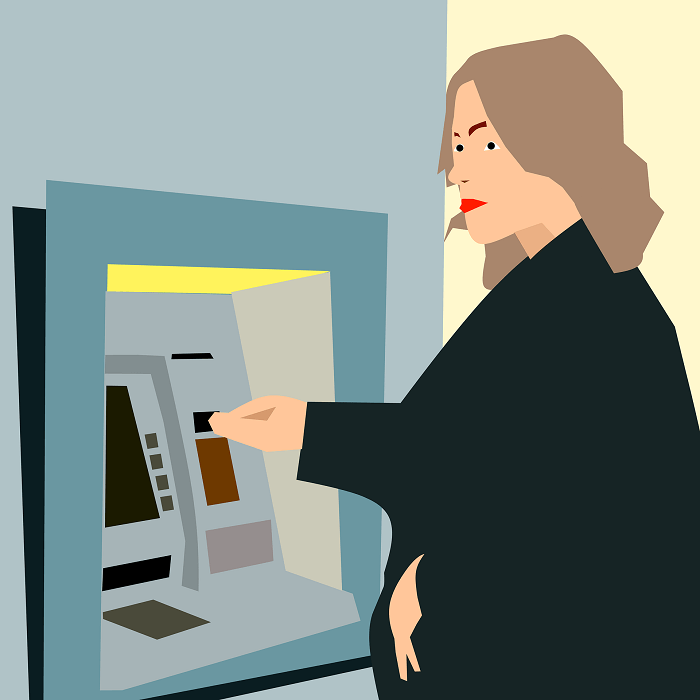 You should be careful when entering an ATM with a credit card. In some cases, there are already fees for withdrawals from ATMs belonging to the “own” banking group. While you can almost always withdraw cash free of charge with a giro card from a particular machine network, the same rules do not apply analogously to credit cards. With almost all German private banks as well as cooperative banks and savings banks, free withdrawals do not apply to credit cards. Instead, you pay some fees at all machines (i.e. both those of your own institute and those of third-party institutes). These are usually between 2 and 4 percent of the respective sum. In addition, there is a minimum fee of 5 euros, so that withdrawals with a credit card can be expensive.

Direct banks are usually an exception to this rule. With almost all direct banks that do well in our checking account comparison, withdrawals with the credit card in Germany and even abroad are free of charge. For withdrawals with the giro card there are usually fees - so the system is the other way around, so to speak. What is special about the direct banks, however, is that you can get cash free of charge at all ATMs in Germany with your credit cards and are therefore not restricted in terms of the number of machines. In some cases, however, caution is also required. At comdirect, for example, you can only withdraw cash free of charge within Germany using your giro card, while outside Germany you can only withdraw cash with a credit card. 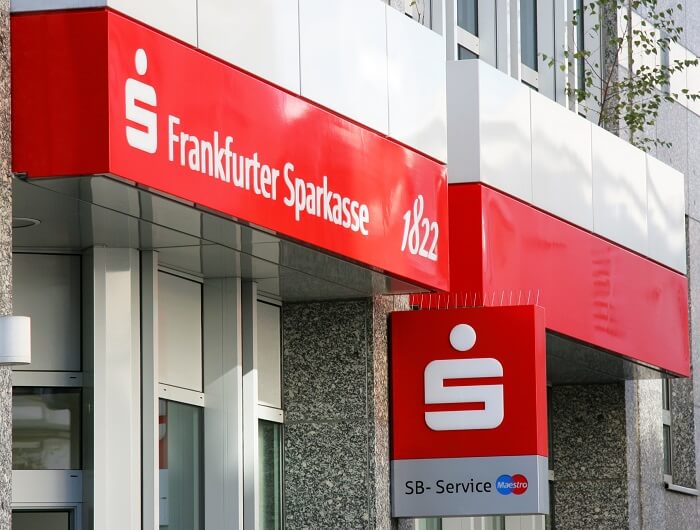 If you want to get free cash anywhere in Germany without any major detours, you can, for example, choose a current account with a savings bank (like the 1822direkt-GiroSkyline). With this aspect, an account with a bank that is a member of the Cashpool network would make less sense. Here the coverage is only good enough regionally. An account with the Verbund Cash Group, for example with Commerzbank or Deutsche Bank, is particularly worthwhile if you mainly withdraw cash in medium-sized or large cities.

In this regard, accounts with direct banks such as the DKB or comdirect are even better. These allow you to get cash free of charge at all ATMs throughout Germany - completely independent of the respective ATM network. So you don't have to worry about coverage and fees.

Please note that you can only get cash at ATMs with a credit or checking card from a direct bank. With this, withdrawals at the counter are either not possible at all or only at high fees at most banks. If you have a checking account with a bank on one of the machine networks, you can also get cash free of charge at the counter with certain types of accounts - but there are usually fees here as well. We would therefore advise you to use ATMs to avoid high fees and to save time.

Which current accounts are available specifically?

In principle, choosing the right checking account for free withdrawals is not too difficult. If you value personal advice on site and are a customer of a branch bank, the Sparkasse, for example, is ideal (see above). You should note that these current accounts are rarely free (exception: 1822). Rather, you have to expect that at least a monthly fee will be incurred. In addition, there are usually other fees, for example for transactions or the issuing of cards. When closing the account, you should also clarify that an unlimited number of free cash withdrawals are possible in the respective machine network. 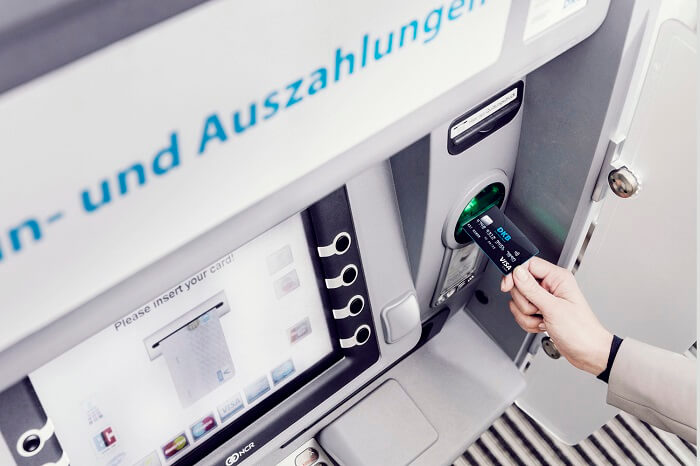 With the giro (comdirect) or credit cards (DKB and ING-DiBa) issued completely free of charge, you can then get cash free of charge at all 58,000 ATMs in Germany. There are only restrictions in this regard at the DKB. Because with this you have to withdraw at least 50 euros per transaction. You can get cash as often as you like, but you have to withdraw at least 50 euros each time. This restriction does not apply to the other two banks mentioned. The restrictions are even more serious with competitors such as the N26 current account or the Fidor account - in some cases you can only get free cash here one to three times a month.

Overall, we would therefore recommend either the DKB current account (if you don't mind the restriction to a minimum amount of 50 euros) or the ING-DiBa current account. The comdirect current account is also recommendable in itself. However, you should always keep in mind that withdrawals within Germany are only free with a giro card, while those abroad are only free with a credit card. With competitors, you can generally withdraw cash with your credit card free of charge at home and abroad, so you don't need your giro card (which is also free) for this purpose.

Do the same rules for withdrawals also apply to deposits? 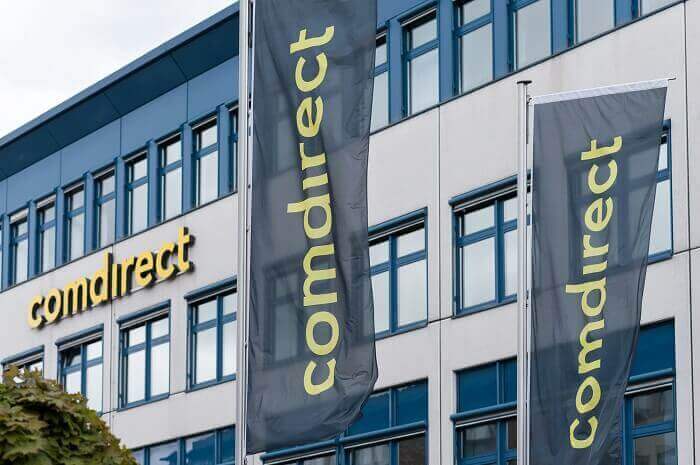 You may be wondering whether, analogous to the rules for withdrawals with an account at a direct bank, you can easily deposit cash anywhere in Germany without any problems. The answer to this question is rather depressing. Because deposits are treated completely differently - already within the various machine networks. With an account at a direct bank, you can usually not pay in cash at all or only to a limited extent (for example, the DKB operates some of its own branches including ATMs) - and only with the giro and not with the credit card. The only real exception here is comdirect, as you can deposit cash free of charge at all Commerzbank branches with a giro card from this direct bank.

In general, you should keep in mind with all giro and credit cards that deposits are much more complex than withdrawals. The exact rules differ from checking account to checking account. Deposits are usually free of charge at most to your own house bank or to branches of the respective bank (for example, several savings banks or cooperative banks usually belong together). Even with other branches of the same banking chain (e.g. savings banks), deposits are usually not possible free of charge. The same generally applies to the machine networks, which therefore do not play a role in this view.