What is the most difficult major at MIT

Chinese is not just a language to be learned. For Europeans, besides German, it is the most difficult language in the world. I am now fluent in Chinese after three years of school. This language is part of my life like eating and drinking. Of course you have to like it and it's brave to choose such a foreign language as your main subject in school. I did it three years ago and I'm so happy about it.

This article should give you a little insight into my everyday life and maybe show you a few tiny fragments of Chinese. It is best to read it when nobody is in the house and you can pronounce the words out loud 😉

Chinese is basically divided into two parts. There are of course the familiar signs. There are around 40,000 of them. But don't worry - you only need to know about 2000 for a newspaper! 🙂 And then there is pinyin, the phonetic spelling. It shows us in western letters how the characters are pronounced. And no, the Chinese don't even know all of their characters themselves, they learn pinyin just like we do and can't read every character offhand.

It is all the more important that you can speak pinyin fluently. After about a year of schooling, you should be able to emphasize and pronounce the words well. Why is that so important? Very easily:

Mā Má Mǎ Mà Ma -Everything the same? Are you kidding me? Are you serious when you say that! If you don't speak good pinyin in Chinese, it can be very easily misunderstood.

In pinyin there are four tones and a fifth, unstressed tone.

The first tone is characterized by a straight line above the vowel (e.g. Mā). It is pronounced in a high, steady voice.

In the 2nd tone you go up with your voice. In my opinion, this is the most difficult tone. You can recognize it by a line upwards (-> voice goes up; e.g. Má).

Tone number three has something v-like on the vowel. The voice goes down and up again. You can exaggerate this tone so that it really becomes clear that you mean the third and not the second tone. (e.g. Mǎ)

The fourth tone is easy to pronounce. The voice drops suddenly. Imagine you scold someone. If it helps you to pronounce the tone correctly, you are also welcome to make an angry face 😉

We'll leave out the fifth note for now. Would you like to try yourself?

Chinese grammar is a dream. I am also learning Spanish at school and every time I suffer from the new grammar rules ... 😀 None of this really exists in Chinese: Verbs are not conjugated, nouns are not declined, there are not even two words for him and her! 😀

There are usually very few sentence positions and formulation options and often one answers questions with a single word. ALL past tenses of the verbs are formed with a word, which is simply attached to the verb and that's it! If you imagine all the rules and irregularities in German ...

Of course, it's all the more important to internalize that little bit of grammar.

As I said above, I've been studying Chinese as a fourth major at a grammar school for three years now. How is that supposed to work?

in class we almost only speak Chinese. In addition to the book and a workbook, we have a grammar and drawing book. In the latter we write a lot of the signs, for exercise. By the way: our teacher is German and has no Chinese parents either.

As in every major, we write 4 class tests and vocabulary tests. There are not a lot of vocabulary due to the little grammar, but the few should be learned. In an English sentence, it doesn't really matter if you don't understand one of the words. The words are also easy to paraphrase. It's different in Chinese. If you don't understand even one word, you may only be able to understand 15% of the content ...

Chinese is amazingly exciting. I love learning this language and I am very happy to have chosen it as a second foreign language. Especially now that I have also chosen Spanish as a third foreign language, I particularly appreciate Chinese because of the limited grammar.

For some reason, I'm also really good at Chinese. English is my best subject - I've never written a 1-2 or worse in Chinese! 😀 (And NO, I do not study pathologically on every test 😀)

I also love to write signs and am (anyway) enthusiastic about the culture, the cities and the people there. In 2018, the exchange to China is due, and I will certainly be there. We will travel from Shanghai via several partner schools and the Great Wall to Beijing: I will of course take you with me! 😀 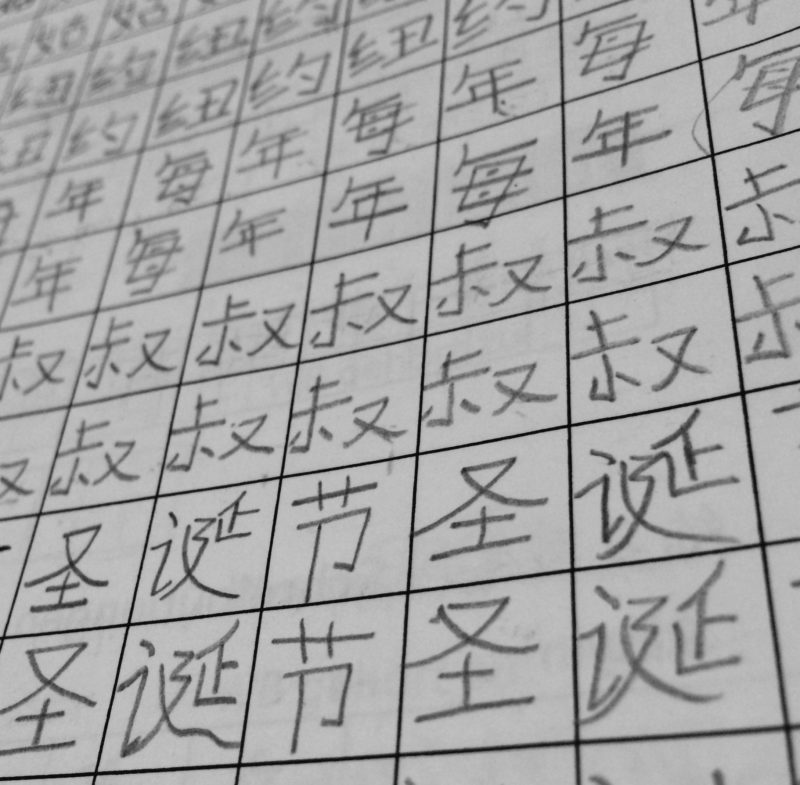